As ownership assets (e.g. stocks, real estate) continue making new highs, the House Ways and Means Committee released a draft of major tax legislation towards collecting some of those same gains. Approximately two months later, President Biden's "Build Back Better" Act substantially revised this legislation, before stalling in Congress. While we're still not sure of the final language, many of the current proposals could become law.

Ask us to show you the potential impacts compared to the current tax law.

A line is appearing in the legislative sand: the proposed legislation affects those with incomes above $400k (single) or $450k (married).

Those with incomes under $400k (single) or $450k (married) are unlikely to see a major impact right away, although exceptions apply.

Those with incomes above $400k (single) or $450k (married) can expect slightly higher income tax rates, plus a return of the 39.6% income tax bracket. 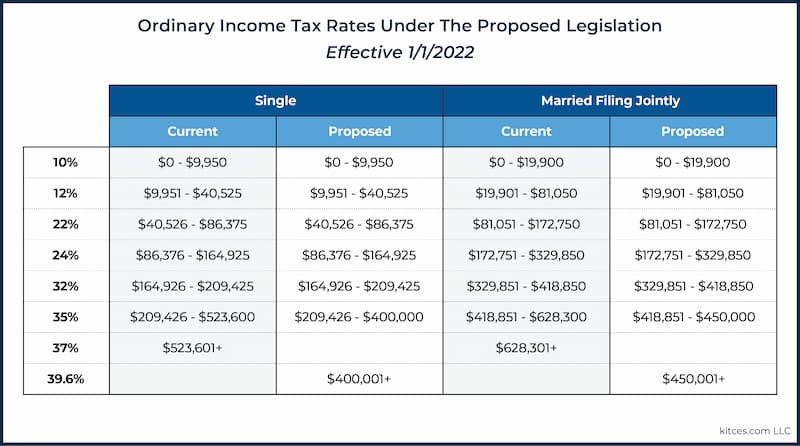 In a shrewd political move, the proposed legislation keeps most tax rates the same but applies these same rates to lower levels of income.

In effect, this raises tax rates without raising rates. Note how the previous top rate of 37% affected taxpayers making above $520k or $630k (approximately). Under the current proposal, the top tax rate affects incomes over $400k (single) or $450k (married).

If you combine these rates with other taxes, plus any state taxes, some taxpayers will see their incomes taxed at rates exceeding 50%.

Those over the $400k or $450k limits will no longer be allowed to convert retirement funds from pre-tax to Roth, whether in an IRA or a qualified plan. However, this rule will not take place for 10 years - until January 1, 2032.

Starting in 2022, these same high earners will not be allowed to make "backdoor" Roth IRA contributions.

Return of the "marriage penalty"

These changes also bring back the "marriage penalty" for incomes over $400k (single) or $450k (married).

Note how the current 12% bracket exists from approximately $10k to $40k (single) and from $20k to $80k (married). While lower brackets are doubled in size for married filers this pattern disconnects in the new 35% bracket. This disconnect penalizes all non-single, high-income households while benefiting single-earners.

In another shrewd move, a 3.0% surtax tax will apply on incomes over $5.0 million (both for single and married filers). However, don't be too quick to dismiss this surtax.

It also applies to certain trusts at a level of just $100k (and don't expect to side-step this tax with a grantor trust; see below).

The proposal also applies the existing 3.8% Medicare surtax on Net Investment Income to profit distributions from S-corporations (for taxpayers with incomes above $400k (single) or $450k (married)).

If so, and your IRAs and qualified plans hold more than $10.0 million combined: Not only will you be forbidden to make yearly contributions but be prepared to distribute 50% of the value next year!

Although President Biden campaigned on raising the capital gains tax rates for taxpayers with income over $1.0 million yearly, the proposed bill creates a new tax bracket at 25% for those with incomes above $400k (single) or $450k (married).

Just like the changes to income tax rates, the optics of this change are also favorable when mentioned in the media: Only 1-2% of taxpayers earn more than $400/$450k. However, this tax rate will likely capture those of more modest incomes.

Consider the impact of selling your primary residence, or a business, or any asset that has appreciated. You could find yourself in a new tax bracket quickly, even if just for one year.

The proposed legislation made these changes to capital gains tax rates effective to the date of the proposal, Monday, September 13, 2021.

While this feature was likely intended to avoid the harvesting of gains at lower levels before the legislation applied in 2022, the difficulty of enforcing this deadline puts this date in question in the final bill.

A second line is appearing in the sand, affecting those with estates above $5.0 million per individual ($10.0 million for a married couple)*. This change would effectively cut in half the current gift and estate exemptions. Some say this limit could fall to as low as $3.5 million or even to $1.0 million.

Wherever this limit falls to, beyond it a 40% "death tax" applies.

If you were to be taxed on all lifetime gifts (and inheritances) beyond these limits at a federal tax rate of 40%, would that change your current strategy? If so, consider if you can utilize a higher limit through the end of 2021.

CHANGES TO GRANTOR TRUSTS = THE END OF SLATS AND IDGTS? AND THE POTENTIAL END OF GRATS and ILITS.

The proposed legislation targets grantor trusts and seeks to limit their effectiveness as an estate planning tool.

Grantor trusts can be useful in excluding assets from an estate, while still retaining control. Trust distributions can be taxed at an individual's lower income tax brackets, rather than higher as more compressed trust tax rates. Plus, at death, trust assets are not included in the grantor's estate.

For trusts created on or after the bill is law, much of this would change.

Distributions from the trust would count as a taxable gift from the grantor to the beneficiary. Plus, trust assets would be included in the grantor's estate at death.

Although the proposed legislation applies to future grantor trusts, there seems to be an appetite to target existing trusts, as well.

Some of these proposals will have major impacts. But, keep in mind that this legislation is proposed, not final. It also must pass through the Senate before becoming law. Furthermore, an election is just one year away. While that will bring uncertainty of its own, it also means that policies are never set in stone.

We’ve gotten pretty good at building some of the proposed changes into our thinking and using the tools at hand to illustrate for clients, on a "what if" basis the potential impacts compared to the current tax law.

Ask us to show you the potential impacts compared to the current tax law.

* The inflation-adjusted limit is $5.85 million per individual.